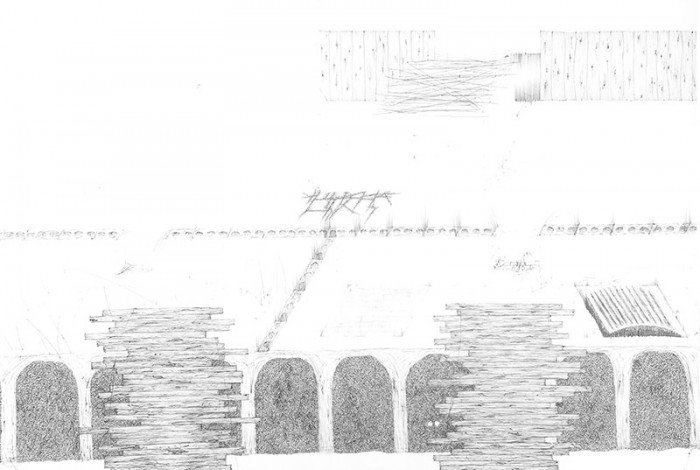 You entered the garden from the back door of the glass lean-to which later became a solid brick extension, once outside there was a small area of rough pebbly concrete with kind of fissures running through it, these fissures seemed to be painted over with black, sealed I suppose, to the left of the back door was a garage that seemed to be made of many old glass doors and windows. I think behind this was another area of concrete, before encountering the high wooden fence and double gate leading to the outside the front garden and the street beyond. So this bit of concrete around the garage and leading to the back door, seemed expansive as a small child and I think I remember my Granddad painting the lines of a tennis court, a very small version, I’m not sure how accurate my memory is on that, because now I am doubting it, but I definitely remember hitting a tennis ball up the side wall of the house, which had the surface of very rough pebble dash, you know where its big pebbles underneath, it was painted white and I think it had many, many, layers of paint, but it was a rubbish surface to hit a ball against, it would bounce off in all the wrong directions. So back to the back door, straight ahead of that was the edge of a low wall about 2 feet high and a few steps up, this led to a raised grassy bit of the garden, on one side of that was a very blackened wooden shed, it was sunk down, you had to go down a few steps to get in, I think it was the remains of an air raid shelter, it was very, very, dark inside but my Granddad would often be in there mending shoes and I suppose a host of other things, there were a lot of small cans of liquid, oils I think. This grassed area was deemed the one we could play on, at the opposite side to the shed, there was a large vegetable patch, with lots and lots of seemingly giant rhubarb plants, I hated rhubarb at the time, its horrible stringiness, there were also lots of tomatoes plants and other stuff I suppose. At the back door again, if I turned right I would come to another small wall and a raised area where we weren't really allowed to go on as children, this was my Granddads good lawn, it was kept a lot shorter and looked neater, we would of course run on it sometimes, hoping not to be caught, then on big family gatherings it would be in use. Along the sides were many rose bushes, with roses that had orange and yellow flowers, with kind of graduated colours, there were lots of things like snap dragons in deep colours, I was really fascinated by these, there were also large sea shells, like conch shells evenly spaced along the flower beds, but I think they had been painted white. In the middle of this lawn at the back was a concrete birdbath on a pedestal. Running across the back of both grassed areas and the vegetable patch was a very high hedge or these could have been trees that had been grown into a covering, but towering above these, (I especially remember this view from my bedroom, but I’m pretty sure you could see it form the garden as well) were these enormous piles of timer, long lengths, like big planks piled as high as the house. maybe? but I guess it could have been as tall as that, it was just referred to as the wood yard. I never saw the wood yard until I was in my twenties. The house was set in a comfortable little enclave of about five streets, but surrounded by industry, I guess a more adventurous child would have climbed over. I also knew that it was near an expanse of water, it was in fact very near a place called Creekmouth that ran into the Thames, as this was the explanation for the gnats in the summer, which always viciously attacked me. But again, I never saw this water, it’s seemed mythical. So finally the two other boundaries of the garden were the neighbouring houses; to the left behind the blackened shed was a high fence, we never saw those neighbours I think they were an elderly couple, and to the right on the other side of the good lawn was a low open slatted wooden fence I think children visited this garden occasionally. It’s funny I haven't mentioned my grandmother in all of this, but the garden was really Granddad’s domain, it feels as though I should write another passage about her domain, maybe I’ll do that for myself.