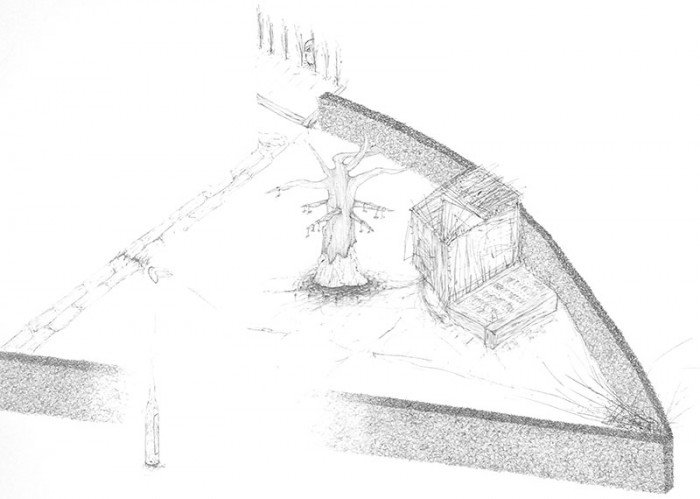 My back garden was very small so I spent most of my time playing in the triangular shaped side garden, it was mostly lawn but it had a privet hedge at the front and my dad had fenced a bit off for a veg plot and built his own greenhouse out of plywood and plastic sheeting to grow tomatoes in. There was one flower bed at the back which just had conifers growing in it. Once I found a nest of baby mice in a bucket behind the conifers. There was an apple tree in the middle of the garden and I liked looking at the ants which ran up and down the branches, they would milk the aphids that lived on the tree and sometimes there would be a ladybird which would eat the aphids and the ants would attack it. When I was about eight I think, my friend came round to play one day and I said we should decorate the apple tree for the birds, I got knives from the kitchen drawer and we peeled all the bark that we could reach off the apple tree and decorated the branches with angel cake and bits of tin foil. I thought the birds would really like it but I got into a lot of trouble for it and the tree never recovered. My mum and dad still live at the same house and all there is now is a stump with holes drilled in it where my dad poured creosote down to stop it from sprouting up again. When it snowed I would lie in the fresh snow at night, there was a street lamp just outside the garden and it made the snow sparkle and glow orange and I would pretend I was in Narnia. The next day my brother would divide the garden into two and he would have the snow on one side and I would get the snow on the other side and we would build snowmen.